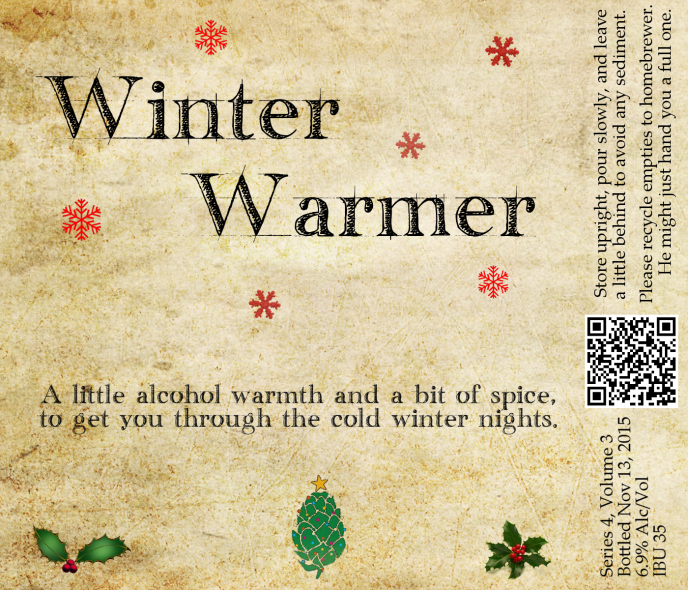 Second time brewing this Christmas brew. The first round was a pretty decent effort at a winter seasonal. I handed most of them out around Christmas, but found a few bottles that I had forgotten about sometime the following summer, and ended up entering them into a contest at a local homebrew shop. It was my first contest entry, and the bottles were eight or nine months old, but it was certainly the most interesting thing I have brewed, so I figured, why not?

The tasting notes were generally positive, but there were two reoccurring comments. The first was that the beer needed more body, so I added a half pound of carapils (reducing the 2 row by the same amount).  Someone also mentioned brown sugar, so I swapped that in for the regular table sugar.

Brew day went relatively well. Mash temperature was pretty consistent at 152. Brewed after work, so time was a little compressed. Once again, I forgot to take a gravity reading while it was in the pot, so I added a full gallon of chilled water. It was still a bit below the 5 gallon mark, but the gravity reading was right on target at 1.074.

The chilling dropped from 72 to 64 while I wasn’t looking, and after adding the chilled water, it was down to 62 degrees. The starter was around 68-70, so hopefully the cooler temperature won’t stall the yeast.

Bit of a slow start on fermentation, even with the starter, so fermentation temperature control was pretty easy for the first few days. Kept it at between 66 and 68.

Slow and steady for the first week, but a large head formed so I had to switch out to an overflow tube. I was headed out of town for the second week, and plugged in the aquarium heater to bring up the temp to 72. When I returned a week later, the carboy was still bubbling occasionally. Very strange. I was a bit concerned that the fermentation had not completed, but went ahead and bottled on day 15. I backed off the sugar a bit to 3.4 oz, which would give a 2.2 carbonation level for 4.6 gallons.

Pulled a quart of beer off, added the sugar and vanilla bean scrapings and boiled for just a bit to kill any germs. The second reoccurring comment from the judges was that the tea flavorings were a bit overwhelming. I reduced the amount of Market Spice Tea from 20 grams to 12 grams and steeped (along with the vanilla bean skins) for seven minutes in the french press.

Final gravity of 1.022 was higher than last time (1.018) but hopefully a bit of that is the carapils providing some body and not a bunch of left over sugar that will cause bottle bombs. Now we wait.

Well, no bottle bombs, but I would say the first bottle I tasted is a bit over-carbonated. Good aroma of malt and spice. Flavor is a bit more subdued and balanced. The tea spice is less prominent, but the vanilla is still not a major component. In the note in the original recipe I modeled this after, they mention how strong the vanilla flavor is, though it faded with time. I am just not seeing/tasting it.

Overall a successful, tasty brew. I am hoping that the carbonation does not increase much over time, as I think it would be interesting to see how this one ages. The first round was still pretty tasty after nine months, and I think this version is a better starting point.