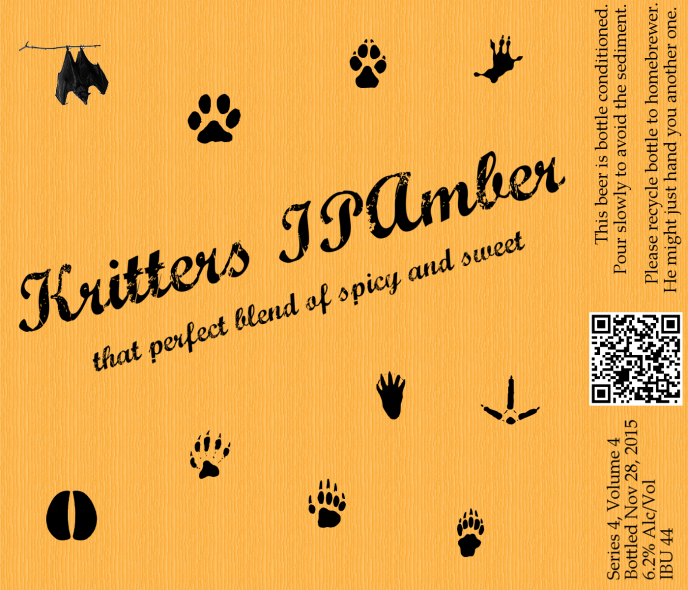 Mashed above grains for 60 minutes at 152 degrees

Other: 1 tsp Irish Moss and Yeast Nutrient at 15 minutes

Fourth time through with this recipe, which as been a great go-to Amber recipe (with some extra hop bitterness). Same recipe as last time, except I swapped out Caravienna for the Crystal 40. The Crystal 40 at the homebrew shop looked burned and seemed to be mostly husks. It might make the color a little lighter and/or the taste slightly less sweet. Or it might make no difference at all.

It has been a busy brewing season trying to get a few varieties ready for the Christmas six packs. I returned from a week in San Diego on Thursday the 12th, and on the 13th I bottled the Winter Warmer and brewed the Kritters IPAmber. I didn’t bother with a starter as time was definitely short.

With the cooler temperatures, I was actually concerned that the conditioning would be slowed. Not a huge deal normally, but time was running short to have them be ready to hand out. The first Christmas party was on December 12th, right around the two week mark.

My house is mostly baseboard heat, which of course is not very efficient (re expensive), so I try to use it as little as possible. The bathroom/fermentation room does have a wall heater, so I have been leaving that on to at least keep things at 65 degrees. You know you are a homebrewer when the only heater you have on in the house all day is in the room you are storing beer.

So I tried a bottle at the two week mark. I would typically wait at least another week, especially with conditioning slowed in cooler temps, but I was going to be handing out the first Christmas six packs the next day and I wanted to see what it tasted like. It was quite bitter and had a nice hoppy aroma. It might be a bit over the top at this point, but will probably be quite nice in another week or two.