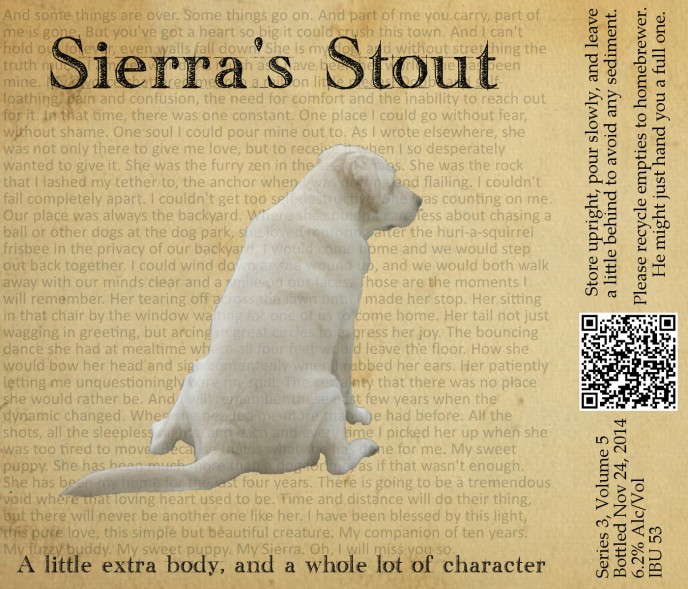 This is a the third time around for this base beer, and it is one of my more consistent successes. I scaled down the recipe to 5.0 gallons from the 5.5 I brewed the last two times. In the second brewing,  I added in some coffee, and this time through I added in some bourbon-soaked oak chips as well. This was also the first time I had people over for a brew day, and it was a great evening with Matt and Jenica. We have brewed a couple of times at their place, and it was nice to host this time around. There were a couple of minor mistakes, but I will chalk that up to having a good time.

Generally smooth brewing day with just a couple of hiccups. The Northern Brewer hops were supposed to go in with five minutes to go, but I didn’t remember until the beer was already cooling. I think it was at about 170 degrees, so it may have picked up a little bit of flavor, though probably not any bitterness. The other snafu was forgetting to turn of the burner under the brew kettle, so the chiller and stove were battling it out for the first five minutes or so.

I had done another 1.5 quart starter, and it had been going for about 16 hours. It started out at 65 degrees, and warmed to 68. Room temperature these days is in the mid 60s, so overheating shouldn’t be an issue. Fermentation was pretty steady at 68-70 degrees for the first week, and then I put in the aquarium heater to warm it up to about 75 degrees for the last five days.

I cold brewed coffee in a French Press again.. Although it tasted great before, I debate leaving it out this time. Ultimately, I decided just to reduce the amount a bit. I’ve lost my notes, but I think I did 3/4 cup of Sumatra to maybe 2 3/4 cups cold water. Let steep for a day, chilled in the fridge for another half while I was at work. I had also been soaking 1 1/2 ounces of light oak chips in 3 ounces of Gentleman Jack. They had been soaking for a couple of weeks, and I added them, along with the coffee,, into the carboy on day eight.

Bottling day went fine. Added 3.6 oz of sugar to get between 2.2 and 2.3 of carbonation. Ended up with 47 twelve ounce bottles

Just waiting on the tasting…