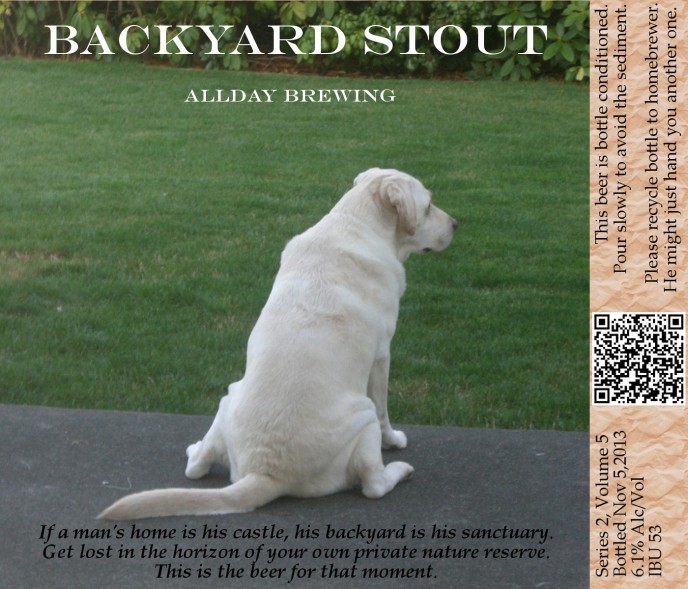 *All About Brewing did not have roasted barley. Substituted in 2 ounces of Black Barley, bringing total to 1lb, 9oz.

This is a rebrew of one of my more successful beers. The first go round was only my second beer brewed, but it turned out great. Of course a beer as dark and rich as this covers up any minor mistakes.

Decent brew day. Small mishap with the 60 minute addition of the Galena hops. I thought the bag held 2 oz of hops, and some how had in my mind that 1 oz = 14 grams (actually 28 grams). Added the other half ounce for a 40 minute addition. According to the software, it didn’t make a huge difference in the bitterness calculation, so it shouldn’t affect it much.

Cooling went pretty well this time. Since it was a 5.5 gallon batch, I added a little over a gallon of chilled water, so that brought it down to 68 degrees. I had done a 1.5 quart starter, and it had been going for about 16 hours. It started out at 65 degrees, and warmed to 68. Room temperature these days is in the mid 60s, so overheating shouldn’t be an issue with this batch.

As with other rebrews, I did a better job of hitting my target gravity. The target for the recipe is 1.068, and I only hit 1.057 the first time around. This time is was almost perfect at 1.067

Cold brewed coffee in a French Press. 1 cup of Sumatra to maybe 3 1/2 cups cold water. Let steep for a day, chilled in the fridge for another half while I was at work. Did a taster with Obsidian, adding one teaspoon to 6 ounces of beer. Seemed like too much, so I combined the two six ounce samples. It tated pretty good, but maybe still just a bit too much. this would be roughly 26 ounces of coffee to 5 gallons, so I ended up adding about 20 ounces to the fermenter. Added on day eight.

Bottling day went fine. Added 3.85 oz of sugar, assuming I would net about 5 gallons of brew, to get between 2.2 and 2.3 of carbonation. Ended up with 50 twelve ounce bottles and 2 twenty-two ounce bottles. There was probably another bottle or two left in the fermenter and bottling bucket, so the net was roughly 5 1/8 gallons. May be a bit undercarbonated, but we will see.

The original brew of this a couple of years ago ended up at 4.75% alcohol since the beginning gravity was low, so there will be a few differences between the batches. The sample tasted pretty darn good. Coffee flavor was pretty subtle at this point, and the beer was a good mix of smooth and bite.

The finished brew turned out very good. The coffee flavor added to the already rich flavor of the stout. I may toy with the amount of coffee next time, but other than that, this recipe is pretty locked in.