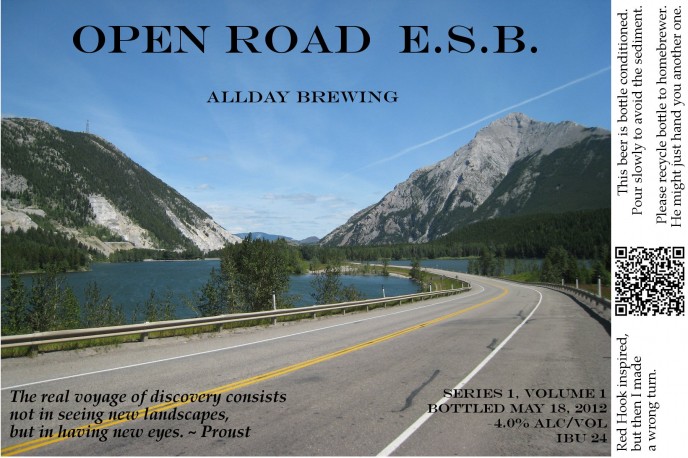 Other: 1 tsp Irish Moss at 15 minutes

This was my first attempt at homebrewing, and of course mistakes were made. I had read The Joy of Homebrewing, and had helped (watched) a friend brew a batch, but I went off book a bit when I did it myself.

The kit I purchased was originally a prize from a Sam Adams contest, and included a DVD from head brewer Jim Koch to guide you through your first batch. When he gets to cooling the wort, he ladles it over some large chunks of ice. This leads to my major mistake. My buddy had used a standard wort chiller that looks like this. 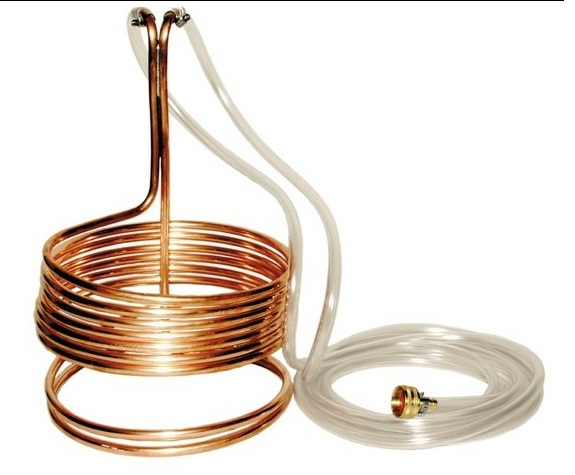 The chiller is immersed in the the boiling wort, and cold water is circulated through the copper tubing. Like a radiator, the colder water cools the surrounding wort without actually coming in contact with it. Since I had not invested in this type of chiller yet, I went with the ice method.

I let the wort cool to about 160 degrees, and then filtered it into the fermentation bucket that had two-thirds of a bag of grocery store ice along with some water already in it. This cooled the wort down most of the way to the pitching temperature, and then I placed the bucket in an ice bath to cool it the last ten or twenty degrees. When it needed to be cooled a few more degrees, I added more ice.

Shortly after finishing, I read online that the ice method is not the best, but can work. However, the article made the point clear that you are NOT to use store-bought ice. Apparently there is often dormant bacteria in it, the bain of the homebrewer.  Every step in the process, they emphasize the importance of sanitation, and here I may have thrown in several pounds of bacteria cubes into my beer.

Well, not really, but he did make using ice seem like a simple solution. There was nothing I could do at this point except wait and hope for the best.

The second place where things went sideways was during the fermentation. In the middle of that first night, the yeast started doing its thing, and CO2 was soon bubbling out of the overflow tube. I kept a close eye on the rate of the bubbles to mark how it was progressing. It initially was perking along at a bubble every couple of seconds, but after about three days, the bubbling slowed dramatically to over 40 seconds.

While I was siphoning the beer from one bottle to another, I pulled a sample and took some readings. As detailed above, the gravity readings showed that the yeast had already gone through over two-thirds of the available sugar. After taking all the readings, I did a little taste test. The beer was room temperature, and nowhere near finished, but the hops were prominent, and it had an interesting flavor overall. I added in another ounce of Tettanger for dry-hopping, and put the carboy back in the closet for another week and a half.

During that time, the bubbling rate did some weird things. There wasn’t a nice linear progression where each day it would slow a little more. For the first few days, things sped up, and then it seemed to bounce back and forth between each reading – 32 seconds, then 27, 33, 40, 37, etc. At thirteen days, it was up to 58 seconds, and then twelve hours later, it was back down to 37. It made me a little crazy.

It finally hovered near or over the minute mark for a few consecutive readings, and I moved it to bottles after a total of 16 days. I took more readings, and took another taste. Of course there still was no carbonation, but much of the fermentation was finished and the alcohol created. This time I put it in the fridge for a hour or two before taking a taste.

It wasn’t as hoppy or interesting as it was after only three days, and the flavor had an odd component to it. I don’t know if it is bad/spoiled, or if it is just a homebrew flavor. I set the bottles in my room, covered them in a towel to block the light, and tried to ignore them while they conditioned for two more weeks.

Excited about homebrewing, and a little concerned about how my first batch was going to turn out, I brewed another. This fortunately distracted me from obsessing about all the mistakes, and how bad the E.S.B. was going to turn out. May 31st rolled around, and I opened the first bottle with my friend and fellow homebrewer, Sean….

It wasn’t great, it wasn’t terrible, about what I should have expected for my first attempt. It definitely had that “homebrewer twang”, and the hops were not much in evidence. The carbonation was a little low as well. I plan to stick the bulk of the brews in the cellar to age a while longer.

Later on that evening, I tried another bottle next to a Red Hook ESB to see how close the general feel of the beer was to the inspiration. It wasn’t as far off as I thought it would be. I hadn’t had a Red Hook in years, and I guess I remembered it being better than it was. Fortunately, the next beer is based on a beer I really like, so it will be a better test of how well I did with the homebrew version.

Lots of stumbles, and plenty of room to improve.

The beer improved day by day. The carbonation came up and that homebrewer twang seemed to fade a bit. I offered some Open Road ESB at a party over the weekend, and the reaction was quite positive. All were impressed, especially when I told them it was my first brewing attempt. The bad news is that we have plowed through much of the two cases in a week’s time. Can’t wait until the next batch is ready.