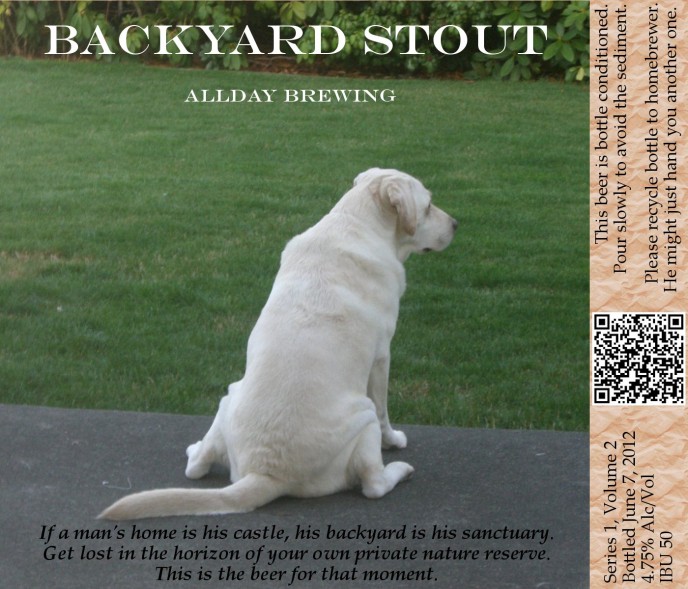 Other: 1 tsp Irish Moss at 10 minutes

I enjoy many types of beer, but my favorites fall in the stout/porter category. I still don’t know enough to make the distinction between the two, but I prefer the ones toward the bold end of the spectrum vs. the milder Guinness type of darkness.

After learning the process with the first homebrew (a milder ESB clone), I was ready to attempt duplicating the richness and complexity of a stout. Since I am still a newbie at all of this, I wanted to work off of a clone recipe. But which one?

This is one of the fun aspects of homebrewing – the tasting. I had a primary choice ( Deschutes Obsidian Stout), but I picked up four other stouts to contrast and compare. Each night I would crack open an Obsidian and taste it alongside the other contenders. They were, in order of tastiness:

The Yeti Stout was the clear winner, and Obsidian and Old Rasputin were in an essential tie for second. I decided to hold off on attempting the high gravity Yeti clone until I had a few more homebrews under my belt, and the grains for the Obsidian recipe were easier to find than the ones for Old Rasputin.

With nearly six pounds of grain in the recipe, I split grains into two bags and two pots. With a third pot to heat the sparge water, it was difficult to fit it all on the stove. I also had some difficulty keeping the mash temp consistent, and had to add some water to the main pot just to ensure the grain bag was submerged.

After doing the partial mash of the grains, I moved on to the main boil. This time around I experimented with splitting the addition of the malt extract. I added a third of it to the initial boil, and added the remaining two-thirds with 15 minutes left. Having less sugar in the main boil is supposed to increase the efficiency of the hops.

At completion, I let the wort cool to about 165 degrees in the pot, then filtered it into fermenter with almost 2 gallons of refrigerated water. Then I put the fermenter into an ice bath in sink to cool it further. It took a long time to get the temp down below 75 degrees (I need to invest in a wort cooler).

The measured Original Gravity was low (1.057 vs 1.068). Some errors that may or may not have affected the reading (my brew skills are still at the guessing stage):

* Too high a mashing temp – tried to keep it around 150 degrees, but it spiked now and then to 160. Started too hot as well, as adding grain bag did not drop temp as much as software said it would.
* Too much water in the mash. Had to add water to cover grain bags.
* Mashed for 60 minutes. Might have needed longer with volume of grain.
* Wort not mixed well enough with the topping water. Might have had more water than wort in the sample.
* Too much water overall – did 5.5 gallons this time and didn’t short it at all. ESB batch was 4.75 instead of 5.0 and OG was spot on.

The fementer started bubbling at the 12 hour mark, and perked along nicely for the first week. This time around I had placed the fermenting bucket in a tub with surrounding water to try to keep a more steady temperature. For the first week, the temperature was a steady 68-70 degrees.

At the six day mark, the bubbling rate was around 45 seconds, so I racked the brew to the secondary the following morning. It looked and tasted good at that point. At the transfer, I took measurements of:

I placed the carboy back in the tub and covered it from ambient light for another week. This time around, there was no detected bubbling in the airlock. Soon I started searching the internet for the phrase, “stalled fermentation.” Then I remembered the advice to, “Relax, don’t worry, have a homebrew.” I left the stout to ferment/condition and just monitored the temperature.

Bottled after nine days in the secondary, and unfortunately, the readings were exactly the same as they were at transfer. No further fermentation had taken place. No clue what this means, but I may skip the secondary on the next brew, or at least leave it in the primary until fermentation is nearly done.

Stirred the mixture a bit to make sure the sugar was evenly distributed, as there seemed to be variance in the amount of carbonation in the ESB bottles. Yielded 48 bottles plus a couple 22 oz bottles. Some issues with capping, but I think I wasn’t applying even force to the two levers.

I first tried a Backyard Stout at the two week mark, and fortunately my friend Sean had a Obsidian Stout in his fridge so we could compare the clone to the original. I have to say it was pretty darn close. The homebrew version was not as well carbonated and a bit lower in alcohol content, so the mouthfeel was a little different, but the taste structure pretty spot on. Nice coffee and chocolate tones without any adjunct additions.

The carbonation improved after another week or two in the bottle, but it was never quite up to the commercial version. This is not as big an issue with a stout as it would be with a lighter beer like a pilsner, so the beer is still excellent.

I found out why I was having a bit of a problem in capping a few of the bottles. It turns out I had a few screw-top bottles mixed in with the empties. They still worked, but I will be sure to drink those first since I can’t be too sure about the seal. These may be a bit lower carbonated, though I haven’t done a side-by-side comparison yet.

All in all an excellent brew. I will try this again sometime in the future, and would be interested to see how it turns out if I get closer to the target gravity.